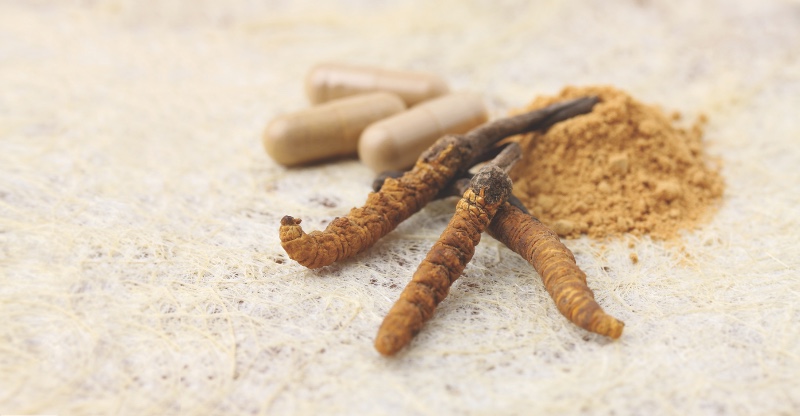 There are probably not too many people in central Europe who have not already heard in the media about Cordyceps Sinensis and the precarious conditions that it is collected under.
Cordyceps Sinensis grows in the wild, at elevations above 3000 metres in the Tibetan highlands and the Himalayas. The fungus parasitises moth larvae. The moth larvae die, and the mushroom fruiting body springs from the mummified moth larvae. Its Chinese name is dong chong xia cao, 冬虫夏草, which translates as winter creeper summer herb, which describes how cordyceps arises. Traditionally, Cordyceps Sinensis is used and traded as the larval mummy along with the mushroom fruiting body.
For LIAN's vitality mushroom cordyceps product, cultured mycelium is used. This comes from Paecilomyces Hepiali, a cordyceps species which, in contrast to Cordyceps Sinensis, can be cultivated in liquid cultures. This is how the mycelium CS4 is obtained. The scientific view is that CS4 is so similar in its chemical structure to Cordyceps Sinensis that the two substances can be used equivalently. CS4 tonifies jing, wei-Qi, yin and yang and transforms phlegm